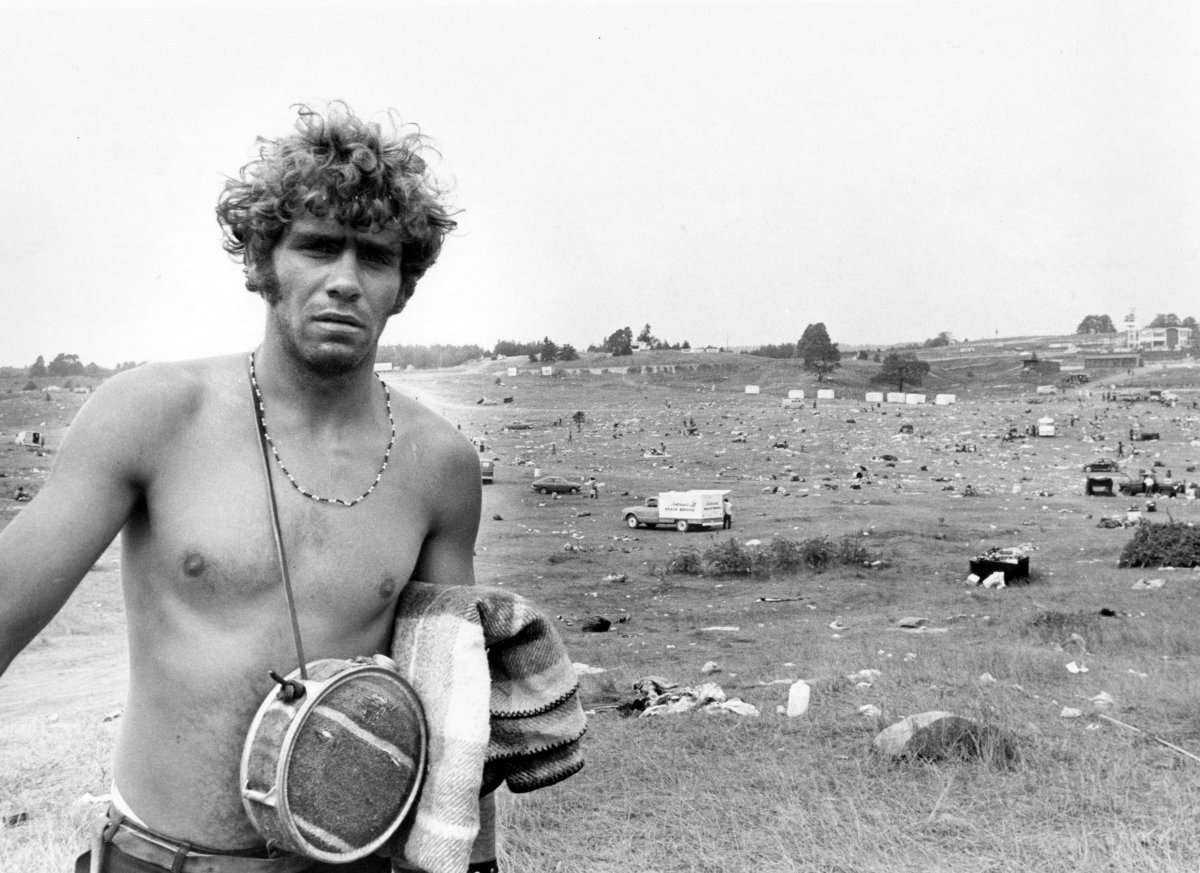 Alton Hamm from East Harvard County, Conn. on his way home at the end of the Strawberry Fields rock festival, Aug. 10, 1970.

When organizers of the Monterey Pop Music Festival announced plans for a multi-day event in June 1967, there were plenty of skeptics. No one had ever done anything on this scale for rock bands. But despite terrible sound, lackluster audience amenities, and dodgy sanitation, the festival was a hit, thanks to some great performances from Jimi Hendrix, The Who, Janis Joplin, The Mamas & the Papas, Otis Redding, and more. The era of the rock festival had arrived.

Festivals began springing up like mushrooms, some legendary for good reasons (Woodstock) and bad reasons (Altamont). Others like Glastonbury (est. 1970) and Roskilde (est. 1971) became annual events that continue to this day. Some have been forgotten entirely. The Strawberry Fields Festival falls into this latter category.

READ MORE: (Aug 16, 2020) What some concerts and festivals look like during the coronavirus pandemic

Strawberry Fields was conceived as Canada’s answer to Woodstock, an event for the age of Aquarius. Unfortunately, it didn’t turn out that way.

John Brower was the promoter of the Toronto Rock and Roll Revival Festival at Varsity Stadium in downtown Toronto on Sept. 13, 1969. That show became famous for featuring John Lennon’s first performance outside The Beatles (something that contributed to the band’s break-up) along with the infamous Alice Cooper chicken episode, all captured on film by documentarian D.A. Pennebaker.

Although the show was almost a financial disaster, Brower wanted to escalate things for the summer of 1970.

He secured Mosport Park, the auto racing facility near Bowmanville, Ont., for Aug. 7-10 — one year after Woodstock — and went about booking bands. Now that he had a solid relationship with John and Yoko, the plan was to present the event as the Toronto Peace Festival with the couple acting as official hosts.

But Brower immediately ran into trouble. Permits to hold the festival were mysteriously and repeatedly denied. It wasn’t until documents were declassified in 2007 that we learned that the RCMP was spying on John and Yoko over drug use and their radical political views. John probably wouldn’t have appeared anyway, given that by the time the festival rolled around, he was mired in the aftermath of the Beatles break-up and the start of his solo career.

With Mosport apparently out as a venue, Brower made plans to move everything to a 100-acre strawberry farm near Shediac, N.B., hence the name change to “Strawberry Fields Festival.” But Brower was once again denied the necessary permits, with local officials making noises about the area being overrun by anti-Vietnam, dope-smoking hippies who would be fornicating on the front lawns of local constituents.

After an aborted attempt to move everything to London — more permit denials — Brower came up with a plan to present the event as a motorcycle race featuring some “contemporary entertainment.” Festival? What festival? Nothing to see here.

It worked. Canadian authorities were completely faked out for months. However, this came at the expense of downplaying the artists Brower hoped to bring in — in Canada, anyway.

Most advertising was done outside the country. People in New York state and across the eastern seaboard of the U.S. were promised a weekend of “love, sun, and sound” while Canadians were sold something about a race with some incidental musical performances. Thinking that they’d be the star attraction, a motorcycle racing body agreed to stage a competition, unwittingly providing some official cover. Meanwhile, Brower signed about two dozen acts for the weekend and sold tickets for $15.

Alice Cooper was brought in, as was Jethro Tull, Procol Harum, and Grand Funk Railroad, along with Woodstock vets Mountain, Melanie, Ten Years After, and Sly and the Family Stone. Canadian content came from Lighthouse, Syrinx (an experimental electronic band), and Crowbar. Led Zeppelin and Leonard Cohen were advertised as appearing, but neither showed.

Concerned about security and health issues, Ontario’s attorney general sought an injunction to stop the festival. On Aug. 6, hours before the music was to start, the injunction was denied by an Ontario court, which found no grounds on which to stop the festival from happening. Brower also made assurances that the Addiction Research Foundation would be on hand to provide medical help for any drug overdoses. Game on.

Fans swarmed the grounds, numbering somewhere between 75,000 and 100,000 people, thousands of whom came from America. Many hundreds were turned back at the border because they couldn’t produce adequate identification. A few jumped the border fence.

Yorkville Sound handled the audio using the world’s first 24-channel mixer. Not only was the entire festival recorded, but a film was also made. For some reason, though, that film and the official recording of the performances have never been released. All that exists are some home movies, a few bad bootleg recordings, and TV news footage from the CBC.

And as for the motorcycle race? The official body withdrew once it found out the truth, so there never was a race. However, a couple of racers did take to the track for one lap just to satisfy the promises spelled out in Brower’s agreement.

Despite being a successful, peaceful, and quick possibly even a profitable venture, Strawberry Fields was a one-off thing. And because documentation is sparse, Canada’s Woodstock has slipped largely into obscurity, despite the great bait-and-switch story of how it came to happen.

Can we maybe find that film and soundtrack?