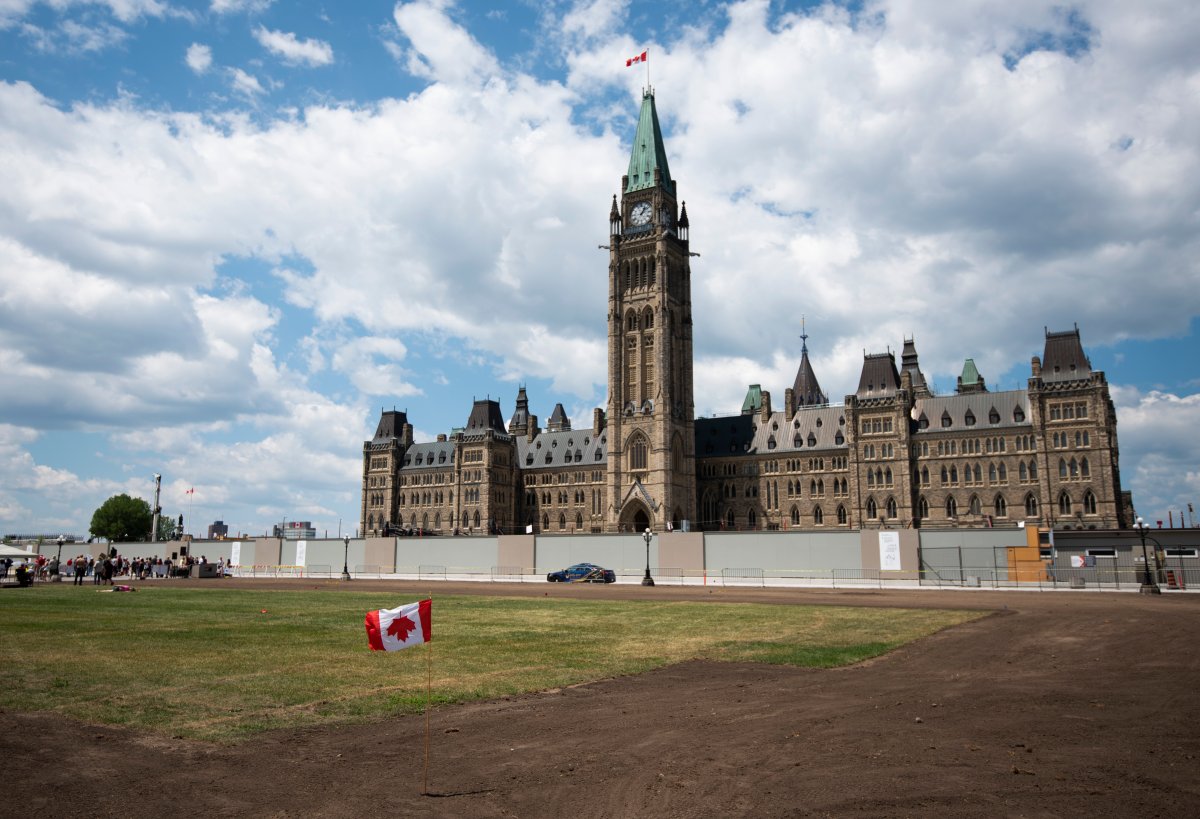 Parliament Hill sits empty on Canada Day in 2020. Festivities had been planned for nearby Major's Hill Park amid ongoing construction at the site, but the COVID-19 pandemic cancelled plans. The event will now go virtual for a second year in a row.

The annual Canada Day event in Ottawa will be virtual for a second year in a row amid the COVID-19 pandemic, the government department in charge of the annual event confirmed Friday.

Typical years see crowds of Canadians and tourists to the nation’s capital flood Parliament Hill for performances and special guests on July 1.

In addition to ongoing restorative work to Parliament’s Centre Block which has restricted access to the lawn, the COVID-19 pandemic has again necessitated that any festivities must take place largely in the comfort of Canadians’ homes.

“For the second year in a row, in light of the current and ongoing COVID-19 pandemic and the government’s priority of keeping Canadians safe, Canada Day will bring all Canadians together and allow them to express their national pride and honour for others in a virtual environment,” read a release from Canadian Heritage.

While the full lineup of virtual events is still to come, Canadian Heritage said Friday that an evening event dubbed Lights on Canada Day will include performers such as singer Jann Arden with hosts Jully Black and Véronic DiCaire.

The Ontario government’s three-step reopening plan allows for large, outdoor events only in the final stage of the framework, once 70-80 per cent of residents have been vaccinated with one dose and 25 per cent have received both doses.

Ottawa and most other areas of the province entered the first step of reopening on Friday, allowing limited business reopenings and gatherings of up to 10 people outside. The earliest time to start the second phase of the reopening, according to Ontario’s framework, would be three weeks later on July 2.

Canadian Heritage flagged that virtual programming will be used to address calls to renew reconciliation efforts with Indigenous populations, sparked by the recent discovery of the remains of 215 children in an unmarked burial site at a Kamloops residential school.

“Canada Day gives us space to hold a truthful, reconciling, and inclusive dialogue, strengthen the ties that unite us, and look toward our country’s future with optimism while acknowledging the past,” the department said.

Victoria, B.C., said this week it will cancel the city’s planned virtual Canada Day event in light of the discovery and will replace it with a broadcast later this summer in partnership with local First Nations groups.

The Keewaywin First Nation in northern Ontario, meanwhile, announced Friday it will recognize Canada Day as a “day of mourning” until the federal government commits to an investigation of all residential school sites.