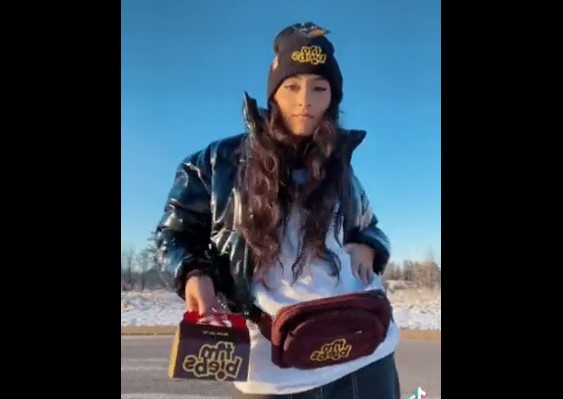 Twitter user @TandonRebecca shared a video of herself decked out in Justin Bieber's Tim Hortons merchandise on Nov. 29.

It’s been a mere few hours since Tim Hortons dropped its Justin Bieber–branded Timbits merchandise, and Canadians are proving extremely hungry for it.

The Canadian coffee giant announced earlier this month that it had teamed up with Bieber for its latest marketing campaign, in an attempt to attract new customers.

And it looks like it’s working — at least on day one.

Toronto artist Keenan D’Abreo celebrated the launch by creating a portrait of the Stratford, Ont.-raised performer out of… you guessed it: Timbits.

D’Abreo used 150 of the deep-fried treats to create his work of art, before taking it down to Yonge-Dundas Square in downtown Toronto to show off to passersby.

I did a thing 🍩 To celebrate the launch of #TimBiebs at @TimHortons with @JustinBieber 🇨🇦 , I got 150 Tim Bits and used them to create this art piece! 🎨 Are you trying out the TimBiebs anytime soon? 👀 #TorontoArtist #Art pic.twitter.com/xxQcwV1djy

All over Twitter, people were quick to show off their new tote bags, toques and fanny packs.

My first stop on the way to work this morning @justinbieber #Timbiebs pic.twitter.com/lZmfxXUNpY

Even this baby who has no idea who Justin Bieber is, got #timbiebs. Asian fans? Nada.. 🥲 pic.twitter.com/VhLArrGxkc

Truly got that YUMMMY with the new #Timbiebs and snazzy merch to match 🙌🏽 pic.twitter.com/bDzuEi389x

And, of course, it wouldn’t be a true merch drop if people weren’t scrambling to sell their newly purchased swag on Facebook Marketplace at an extremely high markup.

This Toronto Facebook seller listed a lot of #TimBiebs branded merch for $200.

Despite the company trying to limit customers to a total of three merch items per purchase, the limited-edition goodies started popping up all over the selling platform by the dozens.

This Calgary seller is unloading dozens of toques, totes, and fanny packs.

The partnership aligns with the Canadian singer’s frequent social media posts about the restaurant, which have ranged from snapshots of a holiday-themed Tims cup to complaints about a new lid.

Bieber has shared posts as far back as a decade ago about missing Tim Hortons while travelling outside Canada.