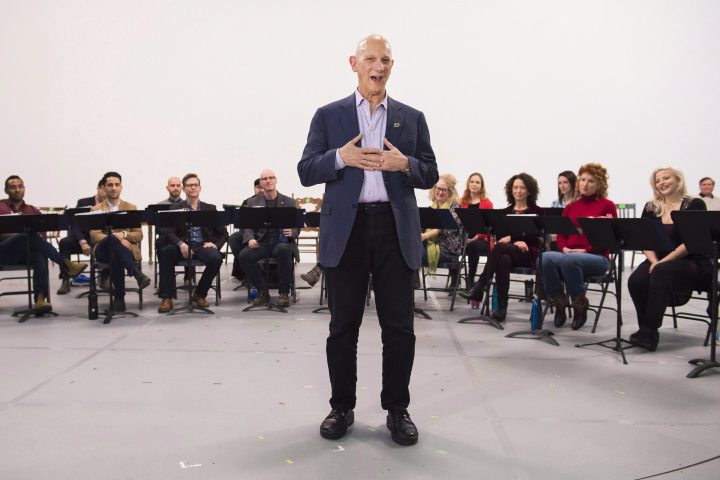 David Mirvish speaks before the cast perform a song of Mirvish's "Come From Away" as they hold a meet-and-greet as they prepare to open the musical in early 2018, in Toronto on Thursday, November 30, 2017.

Come From Away has permanently closed in Toronto.

Mirvish Productions made the announcement in a statement released Monday, citing financial difficulties that have come as a result of the COVID-19 pandemic.

The statement said there have been 855 performances of the musical in Toronto, which is its hometown.

Its final show was on Dec. 22 at the Royal Alexandra Theatre after it had just reopened following a 21-month closure due to the pandemic.

On Dec. 23, it was announced that four upcoming performances of the Gander, N.L.-set musical were cancelled after a positive COVID test among the backstage crew.

Mirvish Productions said at the time that the shows would resume on Dec. 28, but now say the show will not be returning to Toronto at all.

“During this short break, it became bluntly apparent that it would be impossible to continue when this incredibly contagious variant has sent case numbers soaring,” David Mirvish said.

“In other parts of the world, the government has stepped up to support the commercial theatre sector by offering a financial safety net for the sector to reopen and play during the pandemic, thus protecting the tens of thousands of good jobs the sector creates. That is the case in the U.S., the U.K. and Australia, where productions of Come From Away continue to play…

4:24
Special ‘Come From Away’ broadcast set to air

“But in Canada there is no such government support. And without such a safety net, it is impossible for the production to take yet another extended hiatus. The costs of reopening a second time are prohibitively high and risky.”

Mirvish said he knows the news is shocking but said “we are simply out of options.”

More than one million patrons saw the show at the Royal Alexandra Theatre from February 2018 until its closure.

“This is not the way any of us wanted this to end,” Mirvish said.

The Outside World: ‘Come From Away’ creators look back on 9/11

“Come From Away deserves to have had many more years at the Royal Alex. But the risks, uncertainty and financial situation have left us without another realistic outcome.”

Ticket holders of cancelled performances will be contacted and offered either account credits, gift cards, or a refund.

The cancellation is just the latest in a wave of closures in Toronto’s theatre district. Last week, Mirvish Productions announced it was pulling from its schedule the North American premiere of the Tom Stoppard play “Leopoldstadt,” which had been set for early 2022 at the Princess of Wales Theatre.

It followed Ontario’s move to limit audience capacity at large indoor venues — including live theatres and concert halls — to help slow the spread of the highly transmissible Omicron variant.

In announcing the scrapped plans for “Leopoldstadt,” Mirvish had said the capacity restrictions and a non-essential travel advisory from the federal government had complicated logistics.

— with files from The Canadian Press

1:52
The Nutcracker performances cancelled in Toronto due to COVID cases

The Nutcracker performances cancelled in Toronto due to COVID cases