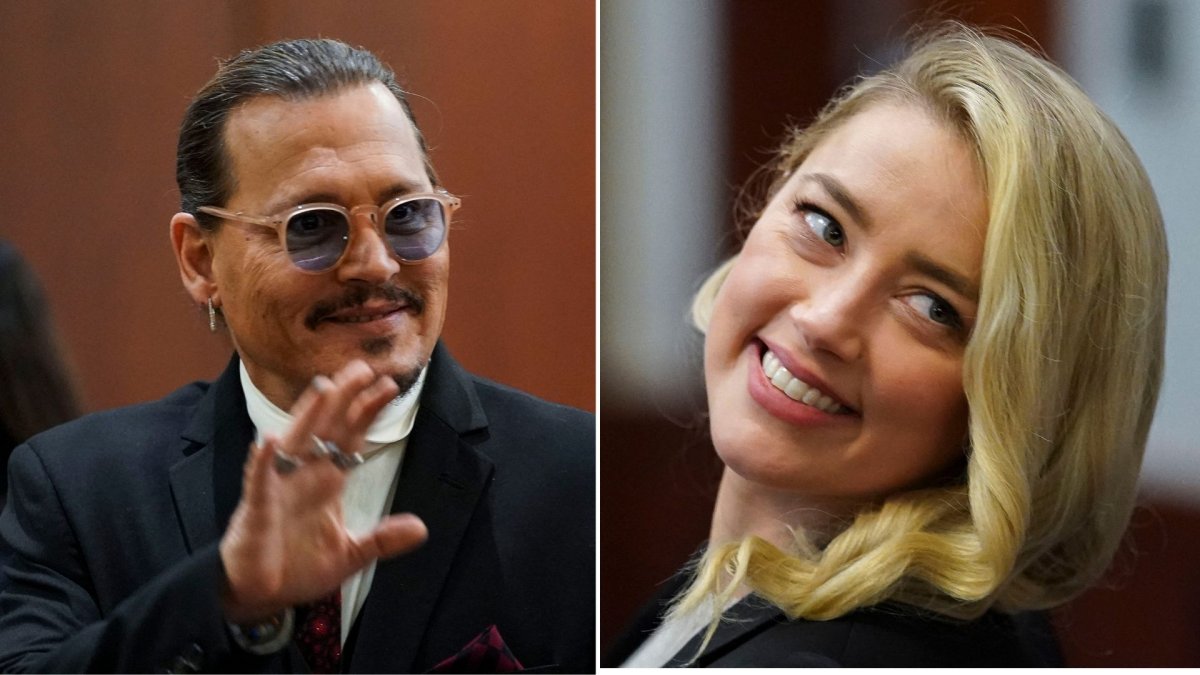 Actors Johnny Depp (left) and Amber Heard (right) in court on May 18 in Fairfax County, VI.

Amber Heard’s sister testified Wednesday that she found herself in the middle of fights — literally and figuratively — between her sister and Johnny Depp during their troubled relationship.

Whitney Heard Henriquez is the first witness to testify at the five-week civil trial to say she personally witnessed Depp hitting Heard. Depp has testified he never struck Heard.

Henriquez testified the fight occurred in March 2015 — a month after Depp and Heard’s wedding — when Heard found evidence that Depp had already had an extramarital affair.

Whitney Henriquez, sister of Actor Amber Heard, testifies on the stand during Johnny Depp’s defamation trial against ex-wife Heard at the Fairfax County Circuit Courthouse in Fairfax, on May 18, 2022.

Henriquez recounted that an inebriated Depp blamed Heard for forcing him into the extramarital encounter.

At one point, she said, she was caught between Depp and Heard as he charged up a staircase to confront Heard. Henriquez said she was struck in the back, and Heard became enraged and “landed one” on Depp, with Henriquez stuck between the two.

One of Depp’s bodyguards intervened and broke up the fight but “by that time Johnny had already grabbed Amber by the hair with one hand and was whacking her repeatedly in the face with the other,” Henriquez said.

It was the only time, Henriquez said, that she personally witnessed a physical assault. But she said she saw the aftermath of other fights, including bruises on Heard.

She said she had the nickname “marriage counsellor” for her frequent efforts to mediate arguments between Heard and Depp.

“Clearly not very well,” she said of her mediation efforts.

But she acknowledged on cross-examination that she sided with Depp at times in their disputes, and said she worked to keep the couple together even after she watched her sister be physically assaulted.

“If my sister said that she still wanted to be with Johnny and if I could help with that in any way I was going to support her. I was going to be there for her,” she said.

Henriquez admitted that once, she even joked in a text message that Depp should hit Heard, but she said she didn’t really understand what her sister was going through at the time.

Henriquez also told a story about Depp’s behaviour at Heard’s 30th birthday party in April 2016, one of the final fights between the couple. She said people took turns sharing favourite memories of Heard. Depp, who arrived late and intoxicated to the party, decided to tell a story about when he first met Heard as she auditioned for a movie and “she sat on the couch and her perfect ass left the perfect imprint on the couch.”

“We were all kind of embarrassed,” Henriquez said.

Depp is suing Heard for libel in Virginia’s Fairfax County Circuit Court over a 2018 op-ed she wrote in The Washington Post describing herself as “a public figure representing domestic abuse.” His lawyers say he was defamed by the article even though it never mentioned his name.

Also Wednesday, a friend of Heard testified she saw the bruises and cuts left in the aftermath of multiple incidents of abuse inflicted by Depp.

In a recorded deposition played for jurors, Raquel Pennington said she never personally witnessed Depp strike Heard. But she said she saw the injuries, and she took photos of Heard’s face in December 2015 after a fight in which Heard says Depp head-butted her and perhaps broke her nose.

Actor Johnny Depp listens as Raquel Pennington testifies in a previously recorded video deposition, as a picture of Amber Heard is seen on screen, during his defamation trial against his ex-wife Amber Heard at the Fairfax County Circuit Courthouse in Fairfax, Virginia, on May 18, 2022.

She also took a photo of strands of hair that she said were ripped from Heard’s scalp.

Raquel Pennington testifies during a previously recorded video deposition next to an evidence picture depicting alleged injuries to Amber Heard’s scalp during Johnny Depp’s defamation trial against his ex-wife Amber Heard at the Fairfax County Circuit Courthouse in Fairfax, Virginia, on May 18, 2022.

Heard “often had to cover bruises and injuries on her face” with makeup, said Pennington, one of many witnesses whose testimony was previously recorded.

Pennington said she doesn’t really consider herself a current friend of Heard, and that the two grew apart in the last year.

The December 2015 fight is one of several disputed incidents. While jurors have seen the photos taken by Pennington documenting the injuries, they have also seen video of Heard’s appearance on a late-night talk show the next day in which those injuries aren’t visible.

Heard has said the injuries were just covered by makeup.

Pennington’s testimony came after Heard wrapped up her time on the witness stand Tuesday, including two grueling days of cross-examination in which Depp’s lawyers questioned Heard about the truthfulness of her allegations of physical and sexual abuse.

Pennington’s testimony provides corroborating evidence to several of the alleged assaults. In addition to the December 2015 incident, Pennington said she saw cuts on Heard’s feet when she returned from a trip to Australia in March 2015. Heard testified that Depp sexually assaulted Heard with a liquor bottle on that trip and that she cut her feet on broken glass from the attack.

And Pennington, who lived for a time in a suite of penthouses along with Depp and Heard, said she was the first person to see Heard during a final fight between the couple in May 2016 that precipitated the couple’s divorce.

Pennington said she interjected herself between the two and Depp knocked her hands away. She said she then covered Heard with her own body on the floor as Depp screamed at Heard to get up. She said she later saw Depp wielding a wine bottle to smash and knock things off the walls and counters.