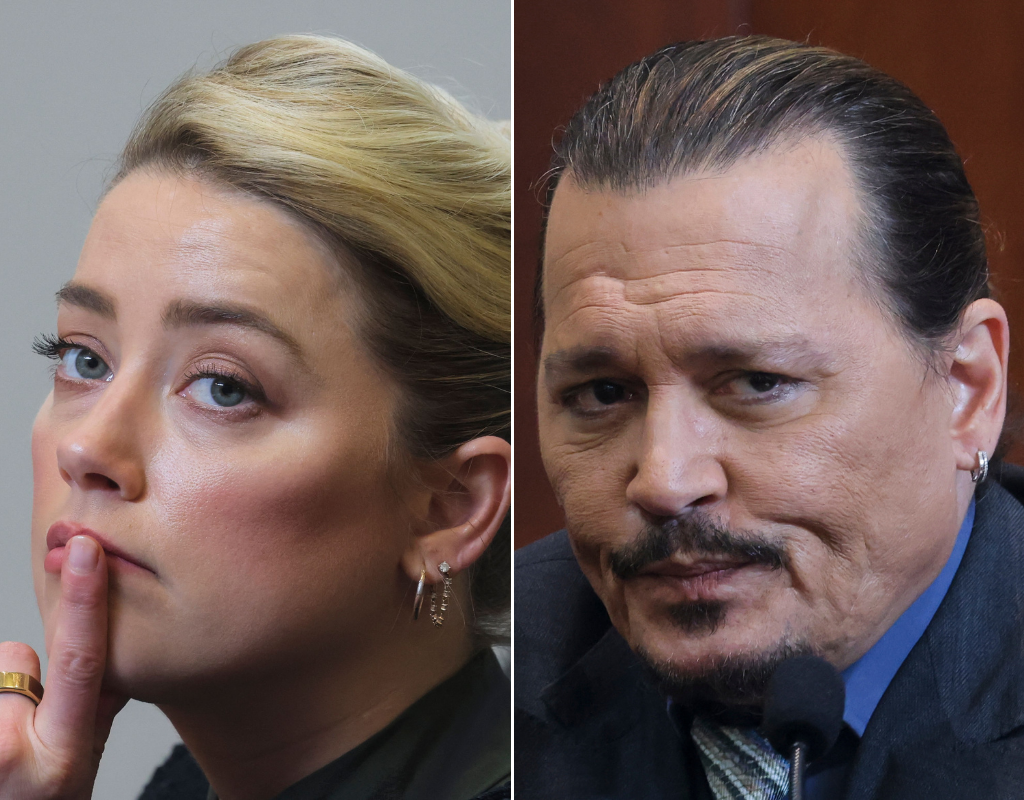 In this compilation of two photos, Amber Heard listens to her ex-husband actor Johnny Depp's testimony during his defamation trial against her, at the Fairfax County Circuit Courthouse in Fairfax, Virginia, on May 25, 2022.

NOTE: This article contains details and descriptions that are graphic and disturbing. Please read at your own discretion.

Depp, 58, is suing Heard, 36, for libel in Fairfax County Circuit Court over a December 2018 op-ed she wrote in The Washington Post describing herself as “a public figure representing domestic abuse.” His lawyers say he was defamed by the article even though it never mentioned his name.

Depp is seeking US$50 million in damages, while Heard is countersuing her former partner for US$100 million.

Moss, a 48-year-old former supermodel — who was romantically involved with Depp from 1994 to 1998 — told the court about an incident in which she fell down a flight of stairs and was saved by Depp.

Kate Moss attends The Costume Institute Benefit celebrating the opening of In America: An Anthology of Fashion at The Metropolitan Museum of Art in New York, N.Y. on May 2, 2022.

In earlier testimony, Heard referred to Moss while she described a fight in which she admittedly punched Depp when she thought that he would push her sister down the stairs.

“Whitney’s back was to the staircase, and Johnny swings at her,” Heard said at the time. “I don’t hesitate, I don’t wait… I just, in my head, instantly think of Kate Moss and stairs. And I swung at him.”

1:04
Johnny Depp’s severed finger could not be from thrown vodka bottle, surgeon testifies

On Wednesday in very brief testimony, Moss said that she and Depp were in Jamaica during their relationship, and it had been raining. She then slipped down the wet stairs in their suite, she said, and Depp raced to help her up, carried her to her room and got her medical attention. She denied outright that Depp pushed her down the stairs and said he never did that at any point during their time together.

Following Moss, Dr. Shannon Curry returned to the stand to rebut the testimony of clinical psychologist Dr. Dawn Hughes, who said earlier in the trial that Curry presented inaccurate information about the mental state of Heard.

Curry shot back at Hughes, saying it was in fact her who drew the incorrect conclusions and test results about Heard. Curry claimed, through her test results, that Heard did not have and “never had PTSD” resulting from abuse at the hands of Depp.

Heard’s lawyer reasserted that Dr. Hughes spent upwards of 29 hours with Heard and interviewed Heard’s mother, and had a fulsome, comprehensive understanding of the actor’s mental health.

After a brief morning recess, Depp returned to the stand to face further questioning.

Depp denied Heard’s previous claim that he consumed between eight and ten MDMA pills on the night of the now-infamous altercation in Australia.

Heard earlier told the jury that Depp forcefully penetrated her with a liquor bottle that night. Depp previously testified that he lost the tip of his finger that night, claiming that Heard threw a vodka bottle at him and it smashed on his hand.

4:05
Johnny Depp testifies that Amber Heard ‘hit him,’ gave him a ‘shiner’ during honeymoon

Johnny Depp testifies that Amber Heard ‘hit him,’ gave him a ‘shiner’ during honeymoon

Depp’s lawyer revisited the couple’s honeymoon – a July 2015 trip aboard the Orient Express. Heard previously told the court that Depp forcefully choked her while on the train trip.

A picture introduced into evidence of actor Johnny Depp and his ex-wife actor Amber Heard with the staff of the Orient Express train taken at the end of their honeymoon trip in Singapore after their wedding in 2015, is displayed on the screens during Depp’s defamation trial against his ex-wife Amber Heard, at the Fairfax County Circuit Courthouse in Fairfax, Virginia, on May 25, 2022.

Depp was shown photos from that trip, and he testified that he’d sustained a black eye after his ex-wife hit him.

“I liked her very much and I grew to love Whitney…(she) always seemed to get the dirty end of the stick.”

Whitney, he explained, was a “trusted sister and friend, and then lackey, and then either the punching bag or the dart board or the recipient of very ugly or demeaning words.”

Depp said although he never saw Heard directly attack her sister, he did say he saw Heard physically push Whitney around and verbally abuse her.

He also testified that Heard threw wine in her sister’s face on one occasion.

Depp told the court that it’s been “insane” listening to Heard’s accusations against him.

“It’s insane to hear heinous accusations of violence, sexual violence, that’s she’s attributed to me. I don’t think anyone enjoys having to split themselves open and tell the truth. But there are times when one has to, as it’s gotten out of control.”

He called his time in court “ridiculous, humiliating, painful, savage, unimaginably brutal and cruel” as well as calling everything that’s been said about him “false.”

“No human being is perfect, certainly not. But I have never, in my life, committed sexual battery, physical abuse, all of these outlandish, outrageous stories of me committing these things.

“This is not easy for any of us, I know that. But no matter what happens I did get here and I did tell the truth. And I have spoken up for what I’ve been carrying on my back reluctantly for six years.”

During cross-examination, Heard’s lawyer pressed Depp on multiple issues, including a photo taken on the Orient Express.

Two photos were shown – one taken before Depp claimed Heard hit him in the eye leaving a bruise and another from after that incident. In both photos, the same mark appeared around his eye.

Depp told the lawyer that the mark on the first photo was caused by a lighting trick, and wasn’t a bruise.

The actor was also shown several text messages to his former assistant in which he allegedly wrote that he would aggressively have sex with a woman he was interested in, presumably without her consent.

Depp told the court he did not write the texts, and that perhaps it was someone else, despite providing them as evidence himself.

Upon redirect questioning from his lawyers, Depp refuted claims that he was trying to get Heard removed from Warner Brothers’ Aquaman franchise. Rather, he said, he was trying to “warn them.”

“Warner Bros. was starting to get quite upset about some of the things that were being said about me in the press. On one level, yes it’s just acting and movies, but it’s also business and I’d given my word to them and I had to tell them exactly what was going on,” he testified.

He also defended the anger he was feeling at that time.

“When you’re accused of horrific acts that you have not done, when it’s actually some very ugly things that are going out there into the world about you on a non-stop basis by Miss Heard and her team, you have a tendency as humans to get very irate. Not to the point where you go out an hurt someone, not the point where you assault a cabinet, but you do get irate,” he said.

Among a couple of other Depp/Heard stories, in May of that year, Tremaine was working on a story about Heard filing for a temporary restraining order, and had sent paparazzi to the courthouse to cover. In August of that same year, TMZ received the video of an angry Depp slamming cupboards in the kitchen that has been played multiple times during the trial.

TMZ claimed the video as an exclusive, watermarked it, and uploaded it to their site. Tremaine claims that the video TMZ received is much shorter than the video that has played in court.

The day wrapped up after calling two more witnesses – the first the founder and CEO of a digital forensics company and the second an airport employee.

Bryan Neumeister, the CEO of USA Forensics, told the court he had reviewed several of the photos Heard had submitted as evidence and confirmed that some of the photos had been run through an editing software, but he was unable to confirm that any changes had been made to the photos outside of the image size.

Beverly Leonard, an employee at Seattle-Tacoma International Airport, told the jury that in 2009 she broke up an altercation between Heard and a travelling companion while in the baggage claim area of the airport. Leonard said she witnessed Heard rip something from a woman’s neck and said she smelled of alcohol at the time.

Court will resume on Thursday morning to hear from the final witnesses, before hearing final arguments on Friday.

Earlier in the proceedings, which began on April 12 and will wrap up on May 27, Depp denied many of the allegations, insisting that he is a “Southern gentleman” and that he had not been addicted to alcohol or illicit drugs.