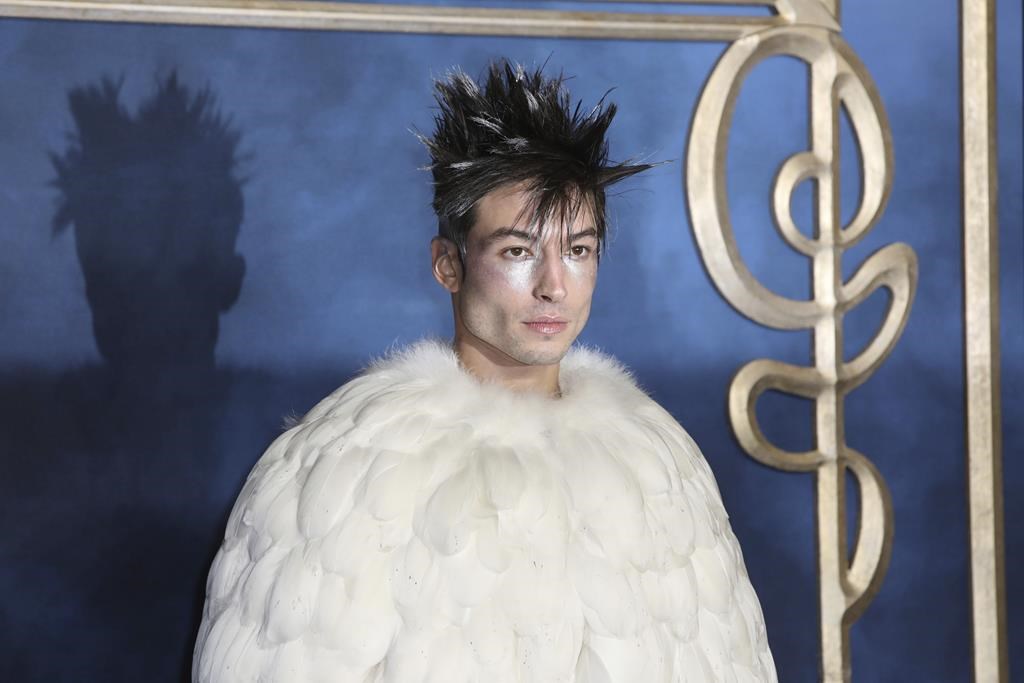 Actor Ezra Miller poses for photographers upon arrival at the premiere of the film 'Fantastic Beasts: The Crimes of Grindelwald', at a central London cinema, Tuesday, Nov. 13, 2018.

Ezra Miller continues to be the at the centre of controversy, this time for accusations the actor is housing a mother and her three young children at a Vermont farm.

According to reports from Rolling Stone, the living arrangement is of great concern to the children’s father, who claims guns and marijuana are easily accessible on the property — owned by Miller.

Miller, who is nonbinary and uses they/them pronouns, reportedly met the 25-year-old mother in Hilo, Hawaii. She told Rolling Stone that Miller, 29, helped her and her children, between the ages of 1 and 5, escape from a “violent and abusive ex.”

The father has denied the abuse allegations.

Unable to contact Miller, who has not commented publicly on the situation, Rolling Stone spoke to both the mother and father of the children allegedly housed on the 96-acre property. Two additional persons with “knowledge of the situation” were also interviewed. All sources in the magazine’s report are unnamed.

One of the sources recalled an alleged instance where the 1-year-old child located a loose bullet and put it in their mouth.

They also alleged “frequent and heavy” marijuana use in front of the children “with little concern about proper ventilation.”

Rolling Stone reviewed video footage that allegedly showed at least eight assault weapons, rifles and handguns stored openly around a living room, with some weapons propped up beside a pile of stuffed animals.

The mother, however, claimed Miller’s ranch has been a “healing haven” for the family. They reportedly moved to the Stamford, Vt. farm in April.

“(Miller) may have firearms for self-defense purposes and they are stored in a part of the house that the children never go in,” she told Rolling Stone. “My kids are able to relax more into their healing because of the safety and nurturing Ezra has been providing for them.”

Alternatively, the children’s father told the publication he has a “bad feeling in (his) stomach.” He wants to retrieve his children from Miller’s property.

He claimed to have contacted Vermont’s Department for Children and Families (DCF) to carry out a wellness check on the children, though information regarding DCF’s visit is unclear. A social worker did tell the father that the children “looked good” but that there was “more work to do.”

The parents have reportedly had issues in the past. As per Hawaii court records, she pursued a domestic abuse case against the father in 2021. The case was terminated when both parents did not appear in court.

In April, the father filed his own abuse allegations against the mother, and mentioned of the children’s removal from Hawaii.

The allegations against Miller are the latest in a slew of controversies againt the Justice League actor.

Earlier this month, the parents of an 18-year-old activist and apparent friend of Miller accused the actor of grooming their child since the age of 12 and providing the teenager with illicit drugs.

According to TMZ, which broke the initial story (later corroborated by several outlets), Miller met Gibson while visiting the Standing Rock Reservation in North Dakota. At the time of their meeting, Gibson was 12 years old and Miller 23.

Gibson later released a video confirming the written statement. There had been speculation it had been written by Miller.

Miller was also arrested twice in Hilo, where they were the subject of at least 10 calls to local police.

In this handout image provided by Hawaiʻi Police Department, Ezra Miller is seen in a police booking photo after his arrest for disorderly conduct and harassment on March 28, 2022 in Hilo, Hawaii.

The first arrest occurred at a karaoke bar where Miller was charged with disorderly conduct. They pleaded no contest and were ordered to pay a US$500 fine.

In the second arrest, Miller was charged with assault for allegedly throwing a chair at a 26-year-old woman, leaving her with a half-inch cut on her forehead.

This undated photo provided by the Hawaii Police Department shows actor Ezra Miller. Miller known for playing the Flash in “Justice League” films was arrested on an assault charge. Police say Miller became irate after being asked to leave a Big Island home and threw a chair, hitting a woman in the head. It’s Miller’s second arrest on the Big Island in recent weeks.

The future of the actor’s movie projects, namely involvement with DC and Warner Bros., is unclear. Miller has previously played Barry Allen/The Flash in the company’s superhero franchise and was set to star in the upcoming The Flash movie, which has completed production and delayed its release until next year.

5:15
Must-see movies, tv and music of the summer