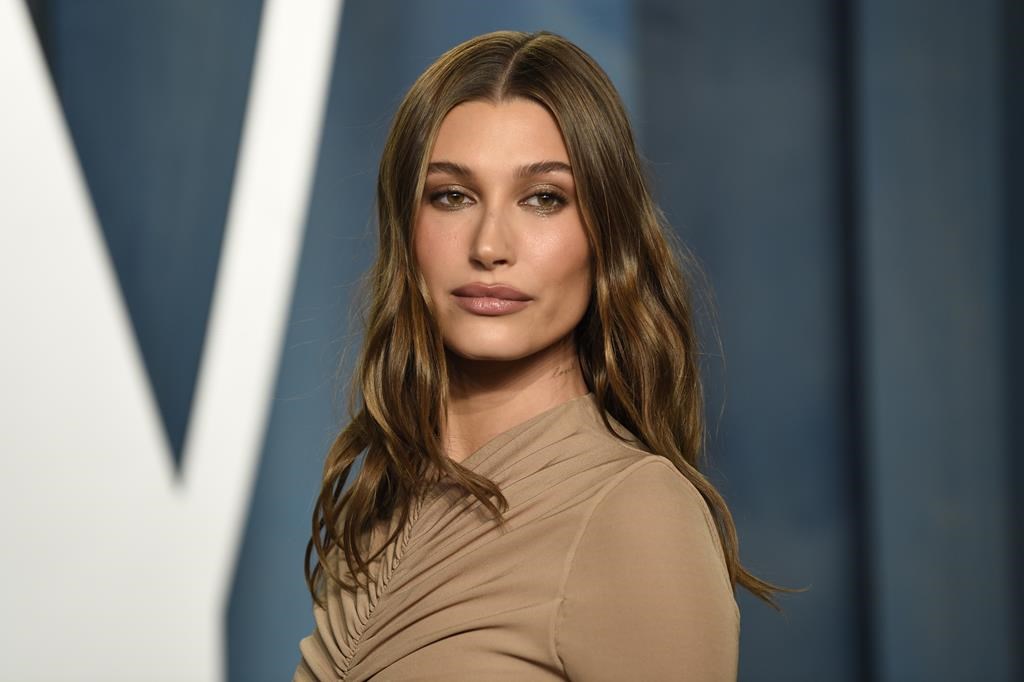 Hailey Bieber arrives at the Vanity Fair Oscar Party on March 27, 2022, at the Wallis Annenberg Center for the Performing Arts in Beverly Hills, Calif.

Following the launch of her new skincare brand, Hailey Bieber is being sued for trademark infringement by the fashion and clothing company RHODE. Bieber’s line is also called Rhode, which is her middle name.

According to People Magazine, the RHODE clothing brand, which has been in business for nine years, filed the suit against Bieber, 25, in the U.S. District Court for the Southern District of New York on Tuesday.

RHODE company founders Purna Khatau and Phoebe Vickers allege the model’s skincare line by the same name has caused confusion in the market.

The founders own the trademark RHODE for “several common clothing items and accessories,” People reported. Khatau and Vickers have also reportedly applied to expand their trademark to other avenues including household items, and were “considering” expansion into makeup and skincare.

In the lawsuit filed in U.S. federal court, Khatau and Vickers claim they worked tirelessly to elevate RHODE, which launched in May 2013, to luxury status in order to be sold in stores like Saks Fifth Avenue and Neiman Marcus, and worn by trendsetting celebrities like Beyoncé and Rihanna.

The lawsuit alleges RHODE is expected to make US$14.5 million this year.

In her declaration, as reported by People, Vickers said Bieber had previously stated she wanted to expand the skincare line into other avenues as part of a larger lifestyle brand. The lawsuit cites a TikTok comment from Bieber, where she responded to a curious fan who asked if Rhode would include fashion. Bieber wrote back “Clothes will come :).”

In the lawsuit, Khatau and Vickers also mention other social media issues, as they claim the Instagram handle @rhode was promised to them by Instagram, as the account was formerly dormant.

Justin Bieber also promoted his wife’s new skincare line on his own Instagram account, spreading the message of the company’s launch to his 243 million followers.

The lawsuit continues, claiming that many social media users have mistakenly tagged Bieber’s @rhode account instead of the clothing brand’s current handle @shoprhode.

On Tuesday, RHODE the fashion brand shared a statement on its Instagram account, notifying followers of its lawsuit against Bieber.

“Today, we were forced to file a lawsuit against Hailey Bieber and her new skin-care line that launched last week and that is using the brand ‘rhode,’” the company wrote in the statement. “We didn’t want to file this lawsuit, but we had to in order to protect our business.”

“We admire Hailey. She has worked hard and earned the ability to create her own skin-care line. We don’t want to sue Hailey; we want to celebrate her,” the statement continues. “As fellow women entrepreneurs, we wish her every success.”

The statement also claims Bieber attempted to buy the company from Khatau and Vickers four years ago, but they declined.

RHODE concluded the statement by writing they are “confident in the lawsuit’s outcome” and hope Bieber can understand the harm she has caused to their brand.

According to People, Khatau and Vickers asked the court for a preliminary injunction ordering Hailey to stop using the name “rhode” for her brand. They have also asked the model to change the name of her skincare line.

In a statement from the clothing brand’s lawyer, Lisa T. Simpson, to People, she claimed Bieber’s company is “harming a minority co-owned business that two women have painstakingly built into a growing, global brand.”

“We, of course, understand that Hailey wants to use her middle name for her brand, but the law on this is clear: you can’t create this kind of brand confusion just because you want to use your name,” the lawyer continued.

Bieber has yet to comment publicly about the lawsuit.

3:52
Alberta lifts remaining COVID restrictions & How Justin Bieber is shining a spotlight on the shingles vaccine