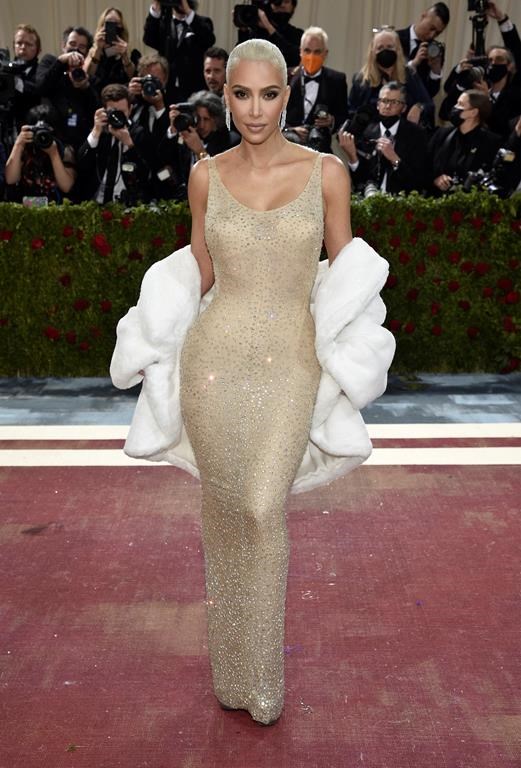 Kim Kardashian attends The Metropolitan Museum of Art's Costume Institute benefit gala celebrating the opening of the "In America: An Anthology of Fashion" exhibition on Monday, May 2, 2022, in New York.

In an interview with the Today Show on Tuesday, the celebrity mogul spoke about why she’d accepted the offer to wear the gown and the intense care it took to preserve the garment.

Kardashian, 41, wore the dress — formerly worn by Monroe while serenading President John F. Kennedy for his birthday in 1962 — to the MET Gala two months ago.

She told Today that she and Ripley’s Believe it or Not — who owns the iconic gown — “worked together so well.”

“It was such a process,” Kardashian told Today. “There were handlers in gloves that put it on me.”

“I showed up to the red carpet in a robe and slippers, and I put the dress on on the bottom of the carpet, went up the stairs. I probably had it on for three minutes, four minutes, and then I changed right at the top of the stairs,” she continued.

“I understand how much this dress means to American history, and with the theme being American, I thought, ‘What is more American than Marilyn Monroe singing Happy Birthday to the president of the United States?’” she said.

In the days following the MET Gala, a Monroe collector posted before-and-after images of the dress, claiming that the dress was left with stretched and buckling fabric, along with missing crystals or ones “left hanging by a thread.”

A post shared by The Marilyn Monroe Collection (@marilynmonroecollection)

“A report written on the dress’s condition in early 2017 states, ‘a number of the seams are pulled and worn. This is not surprising given how delicate the material is. There is puckering at the back by the hooks and eyes,’ among other instances of damage,” the museum wrote.

“Kim Kardashian wearing the … dress has been hotly contested, but the fact remains that she did not, in any way, damage the garment in the short amount of time it was worn at the Met Gala,” the statement continued.

Earlier this month, Kardashian also came under fire when she spoke about the “lifestyle changes” she was required to make to fit the “Happy Birthday” dress.

Kardashian told the Today Show that she lost 16 pounds to fit into the dress. She also wore a fur stole on the MET Gala red carpet as the dress would not close completely in the back.

To lose the weight, she claimed she cut out sugar, junk foods and fried foods. She told Today that, as of last month, she continues these lifestyle changes even post-MET Gala. She said she has lost 21 pounds in total.

Kardashian claimed she viewed the opportunity to wear the gown as a sort of acting role.

“I looked at it like a role, and I really wanted to wear this dress. It was really important to me,” Kardashian told the Today Show.

In an interview with The New York Times, she said she felt the decision was akin to celebrities who fluctuate weight for certain movie roles.

“To me it was like, OK, Christian Bale can do it for a movie role and that is acceptable,” she said. “Even Renée Zellweger gained weight for a role. It’s all the same to me.”

8:53
All the ‘Gilded Glamour’ and top looks from the Met Gala